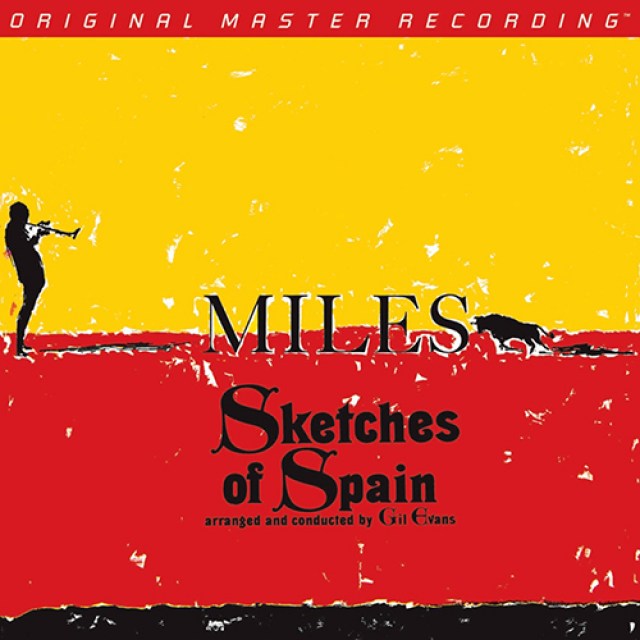 Miles Davis and Gil Evans bridged styles and collaborated on high-concept projects a total of three times during their celebrated career. For their final act, they created Sketches of Spain, a peak moment in each luminary’s career and a transformative album that weds Spanish themes, lush orchestrations, romantic timbres, and Davis’ increasingly lyrical methods in a tender ceremony that continues to resonate more than five decades after its original release.

Part of Mobile Fidelity’s Miles Davis catalog restoration series, the genre-defying 1960 classic has been given the ultimate white-gloves treatment. Mastered from the original master tapes, this hybrid SACD edition significantly expands the soundstage that frames the orchestra and digs deep to eradicate a dryness that many critics have found as an anathema to its overall enjoyment. Here, at last, is the full-figured perspective long deserved by the woodwinds, strings, and percussion, all of which come alive with previously unheard definition and detail.

Indeed, in its three-decade-plus history, Mobile Fidelity has never been prouder to have the honor of handling efforts as important as Davis’key recordings. It’s why the label’s engineers have taken every available measure to insert listeners into the space occupied by Davis, bassist Paul Chambers, drummer Jimmy Cobb, percussionist Elvin Jones, and the 18-piece orchestra. With both Evans and Davis attracted to the blues undercurrents permanently entrenched in the Spanish flamenco strains, listeners can finally wholly detect the myriad microdynamic tonalities, brooding ostinato devices, and minor pedal points that stamp the compositions with divine sensibility and goffered effect.

Multi-note motifs, brief improvisational solos, fanfare sweeps, and contrapuntal exchanges inform the flamenco-spiced pieces, but so do unconventionally voiced instruments that come into full relief on this reissue. Davis’ Harmon-muted trumpet is abetted by an assortment of bassoons and French horns that create pleasing contrasts and sounds (pp, mf, ppp) that get to the heart of Sketches of Spain: splashes of color. Seldom, if ever, did Davis ever so expressively and liberally paint with color. And in Evans, he has a likewise-minded partner to help draw out variegated shades, adamantine layers, and striated distinctions.

Whether it’s the somber mood piece of the standout “Concierto de Aranjuez (Adagio),” renowned for Davis’ flugelhorn performance, or the folktale-based “Solea,” Mobile Fidelity’s enhanced Sketches of Spain transfixes with playing, ideas, and innovations that remain exclusive to this incomparable record.