Miles Davis - On The Corner 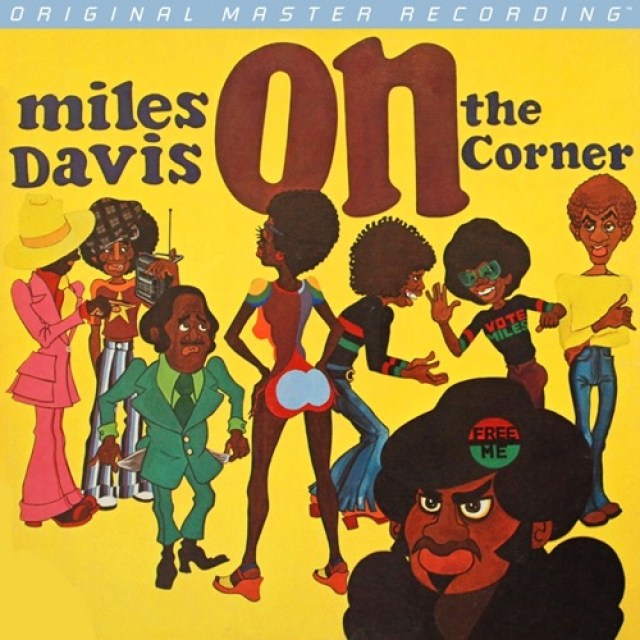 Get Down and Make It Funky: Miles Davis' Groundbreaking On the Corner Focuses on the Groove and Bottom End

Miles Davis' boundlessly influential On the Corner was so far ahead of its time upon release in 1972, the jazz cognoscenti rejected its groundbreaking concoction as middling in nature. Yet time has a way of righting wrongs and shifting views by adding needed context and perspective to visionary ideas, music, and approaches – the likes of which fill Davis' boldest and most controversial – undertaking. Designed to bring the focus back on the groove and bottom-end frequencies, the funk-loaded On the Corner revolutionized jazz. It also set new standards for record production, presaging remixing and electronica by more than a decade. And the work has never sounded more thrilling.

Mastered from the original master tapes, Mobile Fidelity's numbered-edition hybrid SACD of On the Corner exposes the internal mechanisms, free-associated playing, and then-unmatched studio techniques in vivid audiophile-grade sonics. The low end, crucial to every composition here, is both heard and felt, with locked-in bass lines and low-range percussion conveyed as taut, solid, and visceral passages. You can even discern the multiple levels of rhythm Davis employed on complex tracks such as "Black Satin," as On the Corner stands as his first effort to use overdubbing and multiple tape machines.

Heavily inspired by Sly and the Family Stone, On the Corner portrays street vibes and remains Davis' blackest-sounding record. The conscious attempt to connect with youthful audiences tapped into rock and funk is evident not only on the colorful cartoon cover art depicting hot-pants and zoot-suit revelers, but in the music's emphasis of recurring drum and bass grooves. Distinct from Davis' earlier fusion experiments, the record's long-misunderstood set dials back improvisation in favor of beats, loops, and atmospherics that generate trance-like effects. While Davis utilizes his band for core duties – Chick Corea and Herbie Hancock prominently figure – he also relies on an all-star cast of sidemen for concentrated soloing and additional support.

With rhythm providing the basic foundation, other notes fall into place, with their positioning steered by Macero and Davis' editing-room techniques. Looking to the manipulation-based work of Karlheinze Stockhausen and teaming with Stockhausen disciple Paul Buckmaster, Davis re-imagines what grooves constituted and could accomplish throughout On the Corner. The shapes of the songs become completely transformed as they progress. Faint melodies, spacey chords, chunky riffs, wah-wah fills, and repeated motifs bounce in and out of a sonic funhouse that wouldn't be out of place at a Harlem block party. Exotic, intrepid, and filled with Davis' "jungle sound," On the Corner remains daringly hip more than four decades later.

1. On the Corner/New York Girl/Thinkin' One Thing and Doin' Another/Vote for Miles
2. Black Satin
3. One and One
4. Helen Butte/Mr. Freedom X